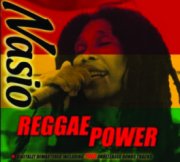 In 1992, Nasio Fontaine (from the island of Dominica) travelled to Jamaica to record his first full-length album, “Reggae Power.” Finally released two years later, this outstanding debut garnered some great press. In a review for the BEAT, Chuck Foster hit it right on the head when he wrote, “apparently [Bob Marley] inhabited the young man of African and Native West (Amer)Indian descent, utilizing Kingston’s Mixing Lab studio and a musical lineup that included such luminaries as Keith Sterling and Robbie Lyn. Roots Radics drummer Carl Ayton and guitarist Dwight Pinkney also help manifest what sounds for all the world like the “next” Bob Marley album in logical progression from later works Survival, Confrontation and Uprising.”

Hard to believe, but it’s true. The lyrical content, along with Nasio's delivery, the crisp, clean sound, excellent songwriting and usage of gorgeous female harmonies is truly reminiscent of where the great Bob Marley was trodding. “Reggae Power” contains ten tracks and just under 45 minutes of non-stop killers, from the infectious “Armed And Dangerous” to the nyabinghi “Wanna Go Home.” This disc truly has some of the catchiest Reggae music you’ll ever hear.

Although the arrangements and musicianship are superb, Nasio really shines as a lyricist, as he is as concise and sincere as it gets. The first words out of his mouth from the opener (the aforementioned “Armed And Dangerous”) are: “Every head of Government t’rough the Earth is Armed and Dangerous.” And he continues on throughout the release, always with something meaningful to say.

On “Racial Pride,” he sings:

“Be you black, be you white. It doesn’t matter...We could still live as one. Tell you why.
Racial Pride is a cancer
Prejudice is a disaster
These are ways and means to divide the people, yeah!
Racism is a catastrophe
Reviving hate and partiality
Trodding through the hearts and minds of I-Manity, yeah!”

Each and every other song is also a KILLER! Just check out the titles: “Under Attack,” “Africa We Love,” “Jah Won’t Forsake I,” “Justice,” “Unite,” “Jah Jah See” and “No Babylon.”

Nasio Fontaine is a righteous Rastaman who is delivering music and a message which needs to be heard. This artist will be a major superstar one day, mark my words. He's presently hard at work on a new release, but until then, if you love Reggae music and especially if you take it seriously, check out “Reggae Power.” I guarantee it'll blow you away!

To check out my review of "Revolution"... REVOLUTION

To check out my review of "Living In The Positive"... LIVING IN THE POSITIVE.


To check out my review of "Universal Cry"... UNIVERSAL CRY


To check out my feature article on Nasio in the BEAT... ARTICLE


To listen to my interview with Nasio (you must have Real Player)...RADIO INTERVIEW


To check out some pictures from my trip to Dominica... PICS