Greetings, I'm Professor Skank, a hardcore reggae enthusiast from St. Louis, Missouri. I've always taken my music very seriously, first being a passionate follower of The Who in the early '70s, then moving on to The Clash later in the decade. That's also when I originally got into reggae music.

The Clash's debut album (by the way, possibly the most intense rock n' roll record of all time) contained an incredible cover of "Police and Thieves." I was so intrigued by it, I went out and found the original song on the excellent introductory album, "This Is Reggae Music, Vol.3."

I was still into the hard rock sounds of cutting-edge bands like The Jam, Buzzcocks, X, Sex Pistols and Stiff Little Fingers, but I was slowly getting hypnotized by the unique sound of reggae. A local radio station had a show called "Beat Down Babylon," which was fantastic. Every week, the extremely knowledgeable Leroy Pierson would play killers and I would record the show (I still have over 70 tapes). Talk about an education!

After college in Austin, Texas (studying journalism) I finally decided to put my love for reggae to good use, and began writing for the St. Louis Post Dispatch in 1992. Soon after, it was my turn to spread these great tunes over the airwaves, co-hosting "Positive Vibrations" with Joe Striker each Saturday from 6-8 p.m. CST on KDHX 88.1 FM, St. Louis Community Radio. Striker retired in 1998 and was replaced by Michael Kuelker. In 1999, the show was expanded by one hour and we were on Saturday nights from 7-10. In 2004, the show went back to 2 hours. We're still on Saturday nights, but we're now broadcasting from 8-10 p.m. (hate to say but they changed the time again, so we're now on from 9-11 p.m.).

That's about it. Be cool everybody. Keep skankin... 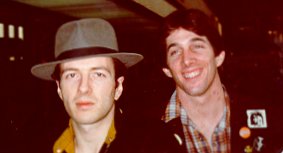