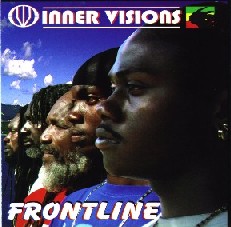 "Frontline" is the latest release from Inner Visions, based out of St. John in the U.S. Virgin Islands. It's the band's 4th studio release, coming after the critically-acclaimed "Street Corner Musicians."

The cd clocks in at just under 70 minutes and has a clean, crisp sound. It kicks off with the excellent "Blasphemers" - a rocking opener - and from there some of my other favorites are the title track (with a nyabhingi intro), "Can You Feel It," "So Nice," "Rebel" and "Push."

The band consists of the Pickering family - Grasshopper on lead vocals and lead guitar, Jupiter on bass, and Grasshopper's boys - Mr. Snooze on keys and Hollywood on drums - as well as Ras Paul on percussion and lead vocals. They've been together since the late '70s and their professionalism shows.

This is an excellent release. Check it out. For more info, Inner Visions' website is at INNER VISIONS